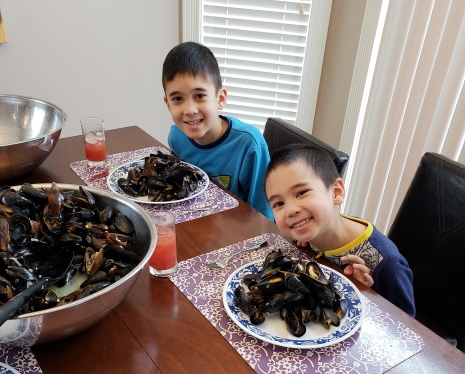 The past four weeks of our family life has turned upside down and back around again. My husband and I engaged in a parenting course called Love and Logic, a parenting approach created by Dr. Foster Cline, Dr. Charles Fay and Jim Fay, that teaches parents how to discipline, teach and raise children without losing their love, giving them choices, and instilling in them the skills to make good decisions and take responsibility for their choices and learn from their mistakes. It has been LIFE CHANGING. It has stretched us as parents in a hard way, yet revealed more and more to us the parenting heart of God towards us and how we want to be more and more like Him to our kids, turning away from certain things we thought to be “right” for parenting.  The struggle came when my oldest, who is almost nine years old now, realized that nothing he used to do to get his way worked anymore. We didn’t solve his problems for him anymore. We now walk beside him as he faces the consequences to his choices and partner with him as HE is the one who has to problem solve and deal with the problem.

While I could write an entire book on the struggles and challenges we have faced, what I wanted to share was one of the nuggets that struck me this past week.  As my son’s world started to change drastically and everything he knew in the home turned upside down, his behavior started to escalate to provoke his father and I to return to old parenting routines and punishments. When this didn’t happen, he pushed, and pushed, and pushed. He pulled out all the stops and did everything in his power to break us. His deplorable choices and attitude the past couple weeks were enough for me to reconsider whether or not I should shred those adoption papers quite yet. I had a new appreciation for those “old school” parents who said, “I brought you into this world, and I can take you out!”

Last week, when Samuel reached his worse that we had ever seen him, and we experienced a child that was OUT OF THIS WORLD, I found myself defeated, discouraged, frustrated, and completely overwhelmed.  We are so very blessed to have our family pastor, who also is one of my dearest friends, support and walk with us through this as she is the one teaching the course.  She has seen the raw, real struggle that I have been walking through, as I have made many “emergency” calls in tears…in the garage…in my car as I was at my wit’s end. Sometimes she would just be on the other end of the phone listening to me sob and snot all over myself in the pantry. One night she said to me, “Could it be that he is pushing to see if you’ll still show up for him?”

That one question was one of the most sobering moments of my motherhood. It neatly wrapped all of my children’s misbehavior in a neat little bow.  It brought me to attention and presented me with a challenge: In the worst of it all, can I dig deeper and show up for them?

I remember as a child how awful it felt when you got disciplined for poor choices. It’s never fun. In fact, the moment you did the wrong deed, your heart sank and you knew there was likely a spank that was going to follow. But what turned this guilt into anger? As an adult, I was able to articulate that it was sadness and shame that would eventually manifest into anger because of self preservation. What made it worse was when my mother would rub my nose in it. The consequence or spank was never enough. There were the lectures that followed, and the angry tones for the rest of the day, and the constant reminder of what I did, as though that would make me forget. None of those things made me change my actions or my heart. It just made me angrier. It made me feel ashamed, unloved, and incompetent. Every time that I thought I had been already punished, but then met with an angry remark later that day, or an impatient tone, or a nose rubbing into my sin again, it reinforced in me that my mother didn’t up for me. It made me feel less and less safe and secure.  As a mother myself now, I can see how this pattern is so easy to follow. We are humans, we have feelings, and we are sinful. Period. All this mixed together, and it makes being mature and responsible downright difficult when our children act like…well…children!

In the midst of their tantrums, disrespect, defiance, poor choices, and willfulness, it’s so incredibly difficult to see the promises, the gold, the snuggles and cuddles, the smiles, the soft hearts and their vulnerability. It’s easy to get lost in our frustration and our own guilt and shame to see what their little hearts are crying out. In those moments, it takes all our energy, efforts and prayers not to just punt them out the window, right? My son has pulled stunts in the last few weeks that would make any sane parent run for the hills screaming and admit themselves in a mental institution just to get a break.  His choices and determination to break me these past couple weeks, in hindsight also came with a lot of fear. In his lack of self control, angry words, poor actions and attitude, there were questions that I didn’t realize that his heart begged to be answered: “Mom…do you love me enough to walk with me through this season? Mom, when I’m not feeling safe because everything I knew is changing, will you hold my hand through this change and let me know it’s going to be okay? Mom, when I’ve crossed over the line so badly that the line is a dot, will you still show up for me the next day? Mom, when I’ve hurt your feelings and break your heart, will you still hold mine? Mom, when everything becomes new and scary, will you still be my safe person? Mom, when I’m sad, hurt, angry and confused, will you still remind me of Jesus because I might forget in my emotional state? Mom, when my choices are horrid, will you still see that I am a good boy, and I’m trying my best?”

One incident last week found Sam losing everything in his room except for his clothes and his bedding. Everything else was gone. No clock, no night lights, no toys, books, papers, crayons, etc. Everything. Gone. And living out that consequence was difficult for him to say the least. It came with tantrums, poor words, poor choices, the whole nine yards! And in his tantrum, he had stormed off to my walk in closet for some time and reappeared minutes later and disappeared into his very empty room. I was sure that I was going to find a hate note for me somewhere expressing how I broke his heart or how I didn’t love him, or a dozen other things he wanted to let me know in that moment. When I went into my closet to look for this note, all I found was a blue pen, some scraps of construction paper and a pair of scissors. I had no idea what he was up to, but I gave a sigh and just let it go, wondering when my apparent “hate CRAFT” was going to appear. Later that evening before I went to bed, I checked on both sons as I usually do, and in my son’s barren room, I see a cut out paper on the floor by his chair and saw his little note he made for himself: “What would Jesus do, Sam?”. The wind was almost knocked right out of me. I had thought the worst. I was so discouraged and couldn’t see past my own frustration that my son was REALLY trying. He couldn’t articulate his struggle, but he was doing his best. He knew he blew it with his actions and his attitude, but couldn’t humble himself to ask me for help. Perhaps he sensed my own frustration and didn’t want to. But I spent most of the day wondering if my children were going to end up being good humans…and then I find the note he made for himself. I am reminded quickly that when they have their moments, it’s just that. They are moments. They aren’t who they are. 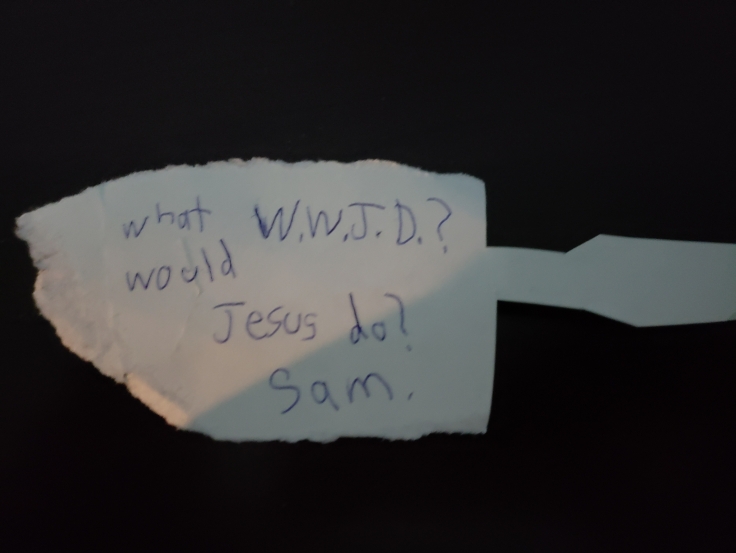 I’m still learning. I’m still growing as a mother and as an individual. I’m quickly finding out that showing up for my kids doesn’t mean that I solve their problems. I’m learning that showing up for my kids does not mean keeping them from facing consequences of their choices and letting them struggle through them.  It doesn’t mean that I let them walk all over us or let them get away with things. I’m finding out that showing up for my kids means that I answer YES to the questions his hearts begging answers to that show him unconditional love. It doesn’t mean that I don’t have feelings of my own, and that I am immune to hurt from his behavior and words. It just means that even if we have a crap day, I’m showing up the next day to graciously love him, encourage him, empathize with him, and forgive him. Showing up for him means that I will hold him to the fire so that his character and his heart can be refined…but not in anger, pride, or a power struggle – but out of a heart of love, perseverance, and gentleness. It means that when my sons want to run from their problems and have me solve it for them, I gently turn them around and empower them to face it and overcome it. It means that we let them know that THEY are more than able to endure the fire, but that we will stand beside them as they face their problems, that we love them unconditionally, and that they learn for themselves that they are well able, that they do not need us to solve it for them or rescue them from it.  Showing up for my kids means doing it the way Jesus would. It means sacrifice. When it’s not comfortable for me, or it hurts my feelings, or when I’m tired, I put it aside, lay my burdens at the Cross, and show up for them…to love them, to hold them, to smile at them, to be patient, gracious and kind, and to be consistent. Showing up is not to do it for them, it’s to be with them as they do it. It’s to show them that we love them too much to live life for them, but that we love them enough to let them make some mistakes and to solve their own problems, all while knowing that we are here to cheer them on, to encourage them, and empower them.

The Lord appeared to us in the past, saying: “I have loved you with an everlasting love; I have drawn you with unfailing kindness.” – Jeremiah 31:3

4 thoughts on “Showing up for our kids”